The history of advertising in 10 great moments 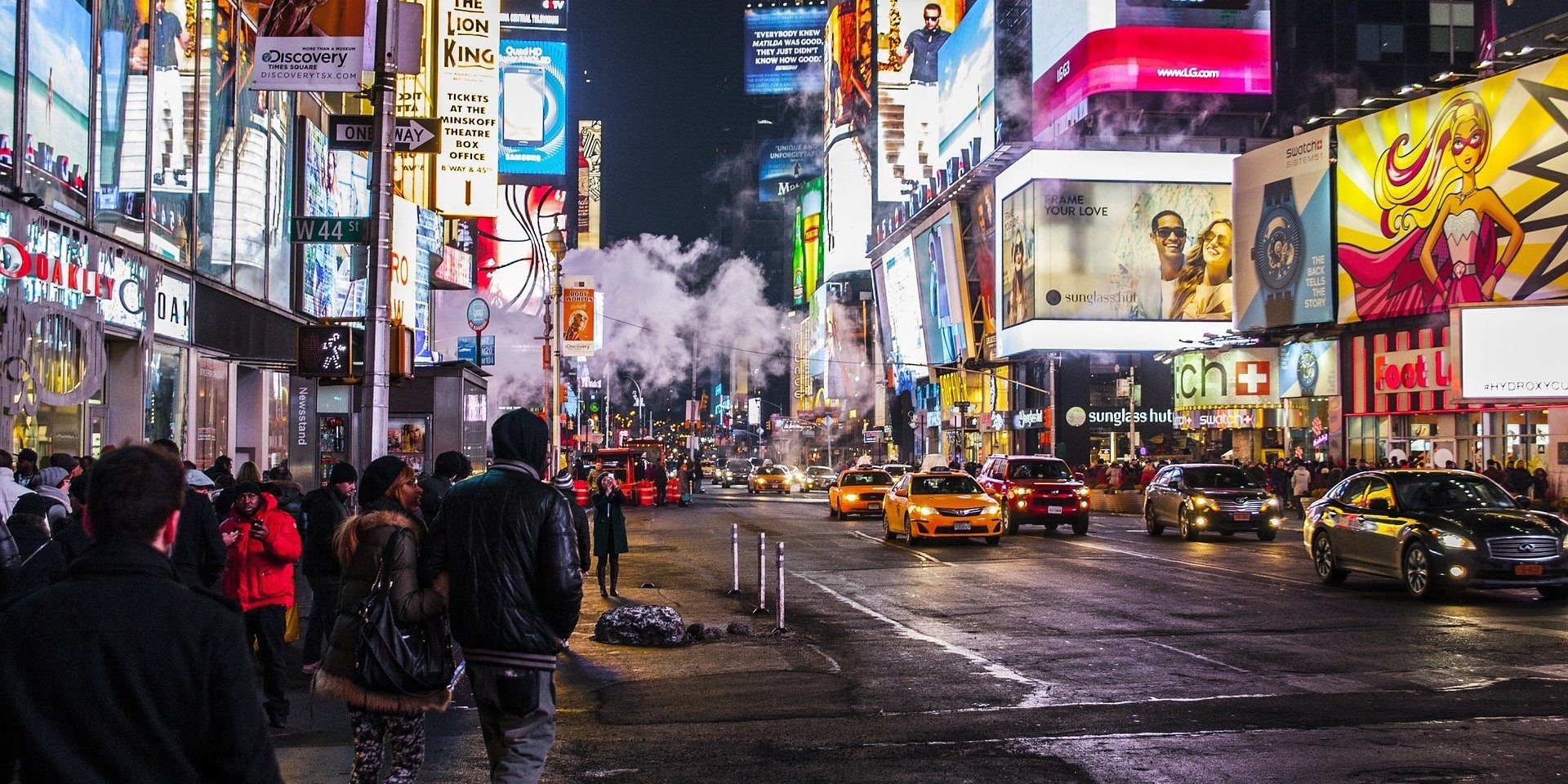 If you have come here, it is probably because you are interested in outdoor advertising, either to boost your business sales or simply to discover what strategies were developed by those who have preceded us. If so, and for you to form a quick idea of how this area has evolved, we summarize the history of advertising in 10 great moments. Pay attention!

1. The pioneers: advertising in antiquity

Although at first it may seem that concepts such as marketing or billboards are something relatively new, nothing is further from reality. In fact, from the Ancient Age we find examples that show that this practice is almost as old as civilization itself. Here’s an example: in Thebes, a painting dated around 1000 BC was discovered, in which a piece of gold was offered to those who captured a runaway slave. This would be something like the precursor of the well-known Far West posters, in which citizen collaboration was requested to find the most wanted outlaws, dead or alive.

A little later, at the time of the Roman Empire, citizens took advantage of the walls of houses and shops to launch their messages: for example, to ask for a vote for a certain person, as was the case in Pompeii. On a wall of this ancient city in southern Italy the following inscription was found: “I am amazed, oh, wall, that you have not yet fallen under the weight of all those stupidities that covered you!” A vintage graffiti, in short, that invites us to think that this support was one of the most useful bulletin boards of that period.

2. Advertising in the Middle Ages: signs and public speakers

Already in the Middle Ages, royal decrees and commercial announcements were spread among people in public proclamations, one of the most recurrent ways to announce, for example, the celebration of a market or the creation of new taxes.

Also in those years, when the immense part of the population was illiterate, advertising signboards used to be placed on the facades of workshops and shops in a way that clearly showed the activity of the business in question (such as a boot, if it was of a shoemaker). Want to know a fun fact? If you live in Barcelona city or you plan to visit the Catalan capital, do not forget to stop by the street of Carassa. On the corner on the street you will be able to see a carasasa, a sculpture representing a feminine face with which the presence of a brothel in that building was indicated.

3. The appearance of the printing press: the first advertising brochures

Although the inventor of the mobile printing press was the Chinese Bi Sheng, who released it in the mid-eleventh century, this advance did not reach Europe until the fifteenth century, by the hand of the German goldsmith Johannes Gutenberg. Thanks to their contribution, the information was made accessible to a wider audience, since brochures could be reproduced in large quantities and in record time. Nothing to do with the pace of work that amanuensis had in monasteries. From this date, advertising brochures began to be distributed by hand in the streets and posters were placed on the city walls. In this sense, we must not forget that paper arrived in European cities towards the thirteenth or fourteenth century.

Already in 1539, King Francis I of France decreed that the ordinances had to be written by hand in French and hung on the wall, in view of all, after the preacher had read them publicly.

4. The first newspapers and advertising agents

As a result of an increasingly rapid dissemination of ideas, the first gazettes would soon appear. Some authors point out the Gazette Française by Marcellin Allard and Pierre Chavalier (1604) as the pioneer, which appears almost at the same time as other publications in the Netherlands and the German Empire. In Spain, the first gazette was the Gazette of Madrid, whose first number was published in 1661.

5. The French Revolution: the emergence of political marketing

From the end of the 19th century, with the fall of the monarchy and succession regimes, the new forms of government were forced to continually demonstrate their legitimacy. Seducing public opinion thus became a key factor in political action. This was especially important in democratic regimes, where this legitimacy entailed elections through universal male suffrage and parliamentary representation techniques.

In this way, the French Revolution kicked off political marketing, through posters and printed pamphlets to quickly spread revolutionary texts.

6. The effects of the industrial revolution

With the industrial revolution, a period of strong economic changes begins. It is backed by great efforts in advertising by advertisers. The rural exodus to the cities, where the factories were located, made an increase in factory production possible and, therefore, the supply of products for sale, which required an informed and willing public to purchase them. On the other hand, the appearance of department stores and the railroad intensified the exchanges and favored the expansion of markets. Hence the emergence of agricultural fairs … and the actions to publicize them.

On June 16, 1836, Parisian journalist and publicist Émile de Girardin first included commercials in his newspaper, La Presse. This lowered the sale price of each copy, which increased the potential number of buyers. Girardin was perhaps the first to understand that newspapers were subject to the so-called double market law, as they competed to attract the public and advertisers. In turn, the liberalization of the press demanded greater investment and, consequently, a growing presence of newspaper advertising. In 1896, more than 37% of the income of the French newspaper Le Figaro came from advertising.

Toulouse-Lautrec, Alfons Mucha and Leonetto Cappiello are three key figures in the history of advertising, as they helped simplify shapes and colors to make the posters more attractive, effective and economical, each in his own way. All of them were architects of the golden age of poster advertising. Later, this concern for aesthetics was extended to the logos of the brands and packaging and, around 1920, to everyday objects such as ashtrays or matchboxes.

In Spain, the design of the Anís del Mono liquor label was a milestone.

On October 18, 1898, Félix Mesguisch installed a projector-camera in the Paris neighborhood of Montmartre – a device invented in 1895 in Lyon by the Lumière brothers – and issued the first film commercial, dedicated to publicizing the virtues of the Ripolin company.

The introduction of theatrical advertising came in the early 1920s through the use of painted curtains and small silent films.

10. Advertising in the twentieth century: radio, television ... and Internet

In the 1930s, advertising designed in the United States entered the scene to introduce technical approaches that sought to differentiate themselves from advertising that focused more on aesthetics than on the benefits of the advertised product. In this period, some of the most famous luminous signs, such as that of Tío Pepe (1935), which still survives in the Plaza del Sol in Madrid, were created. Also in this decade, in 1937, the Universal Exhibition of Paris was the first to show the world an advertising pavilion.

After the economic recovery of World War II – an episode that marked the rise of war propaganda, which began during World War I – publicity experienced exponential growth. Also, the appearance and consolidation of marketing as a management discipline would take place. The birth in the sixties of television advertising, the mass media par excellence, would mark a before and after in the advertising field. This would become the dream showcase for any brand or campaign. By the way: the first LED panel dates precisely from those years, since it appeared in 1962.

The creation of the World Wide Web (www) protocol in 1990 at the hands of Tim Berners-Lee, which would mean the irruption of the Internet for any user, would be a breaking point. With it, concepts such as digital marketing, SEO, SEM, banners, pop-ups, native advertising, landing pages, augmented reality, social networks or influencers would become part of our daily lives.

This is, for now, the last chapter in the history of advertising, although the next one is already being written. Where will it take us this time? Although bets are accepted, the scenario that opens before us is as promising as unpredictable.